Day 1:
Conducting Scientific Research
The first half of the scientific method.
Observations, Questions & Hypotheses - The precursors to research

*IMPORTANT TEACHER NOTES!
Activity Overview
This activity is meant to span over several days - and is meant for students to see how research
begets more research by simple observations turning into further questions.

It starts off with a simple lab that will springboard them towards another experiment that they themselves will work on.

This project walks them through the scientific method via experimental design process,
which is meant to prepare students for the upcoming science fair.
Materials list for today's activity:

Objective: Students will make better observations, formulate questions and develop hypotheses.  Students will then be introduced to the scientific method and have a deeper understanding of what a hypothesis is and what it should look like.

Lesson Plan Notes:
Below is more detailed information about my thoughts concerning this lesson.

Chalk Board classroom Discussion from the observations activity

About the importance of questions and its relationship to research:

"What in this process drives research?  Is it things that we already know, things that we simply observed?  Or could it be the inferences that we make or the questions we ask?"

After a small discussion, I then point out that "A scientist is not a person who gives the right answers, but rather the one who asks the right questions."  What drives research are the things that we don't know - not the things we already know.  It's because we don't know something - we ask the questions.  Questions - therefore, are what drives research.  It is our initial answers that point us in a certain direction.  Our initial answer may be correct, or it may not be correct.  What we lack - is the evidence to support our initial answer.  ​
﻿I then asked the students - did we or did we not form a hypothesis?  If so, at what point in this process did we form the hypothesis? 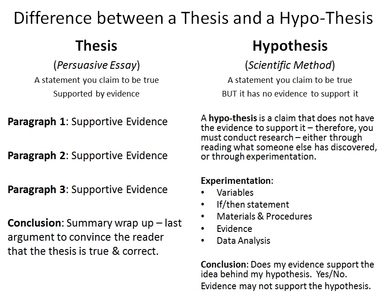 About the hypothesis - what it is and its relationship to the question:

We learn that our initial answer to the question - is a hypothesis.  A Hypothesis is a possible explanation for a set of observations - or an answer to a scientific question.  The set of answers students created, in this exercise, were the set of hypotheses.  It is the initial answer, or hypothesis, that provides the direction to our research.

But what makes a good question?  A good scientific question is one that is open ended (who, what, when, where, why, how) and can be tested using variables.  It is not an opinion based question - such as "what should I wear today", or "should I wear a coat today" - but rather something more like "why is it that raisins don't turn back into grapes when soaked in water?" or "How does water transfer back into  a raisin?"

How the Hypothesis compares to a Thesis:

When we compare a hypothesis to a thesis, we realize that there is a lot of similarities.  A Thesis is a statement or claim that you "know" to be true.  In a 5 paragraph persuasive essay, the author shows evidence that supports the thesis and concludes that the thesis is correct because of the evidence that they provided proves it.

The Scientific Method is very similar to a 5 paragraph essay, and a Hypothesis is very similar to a thesis.  When I separate the word hypothesis into two parts, it becomes evident that a hypothesis is a type of thesis; it's a "Hypo-Thesis" - or "sub claim".  Meaning that a hypothesis is sub par to a thesis statement because it is not supported.  The reason why a hypothesis is NOT a thesis is because it lacks evidence.  A hypothesis, is an unsupported claim that we "believe" to be true, but we lack the evidence to support what we believe to be true; Therefore, a hypothesis must be tested to see if it could be true - we don't know - because we lack the evidence.  Therefore, we need to investigate - or experiment to see if the answer is in the correct direction.  Once we find our nugget of truth, we can then convert our hypothesis into a thesis when we write a scientific article.

How to conduct lab research will follow in our next day.

One thing that I've learned is that an observation may start as an open ended question, which may start the research with a hypothesis written as a possible explanation for a set of observations, or an answer to a scientific question, but that open ended question and answer is then followed by a series of closed ended (Y/N) questions, with hypotheses resembling if / then statements to see if your answer is pointed in the right direction.

The hypothesis game & why its important to run multiple experiments

The point is that when we formulate a hypothesis we need to run a series of tests - not just one test.

The other point that he makes is that we should oft times also try to find out what it isn't as well.  These tests help to confirm or reject the theory of how something works.  In other words, if you think you are right - and you hold a truth to be self evident - then try to disprove it.  In other words, this video shows just how important "no" answers are.  In fact, "NO" answers are unmistakably, in my opinion, more important than "YES" answers - because they set the parameters of what is the hidden truth - by proclaiming what it is not.  So when you are conducting your research, don't be afraid to find that your hypothesis may be wrong - as those answers are just as important as getting it right.

How this compares to experimentation

The point of this exercise is to show that simply running one successful experiment may not fully prove that our hypothesis and understanding is 100% complete and correct.  We may think to ourselves that "we got it all figured out" - when that couldn't be further from the truth.  We got to run multiple tests to see if our level of understanding of how nature works is completely accurate, and not just any test - try to set up tests that try to disprove your reality and understanding.