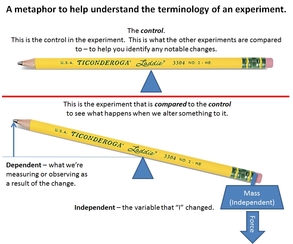 In today's lesson - I walked students through the scientific method - step by step and discussed what each variable is in an experiment.

To explain what a controlled experiment looked like - I used a pencil as my metaphor.  (Please click on the image to the right to enlarge it).

When trying to set up your next experiment - it would be nice to know how to identify your independent and dependent variables.  To put it simply:

Question 1: Why did the tail side seem to hold more water drops?
Hypothesis 1: Because the tails side had a hig﻿her ridge.


Question 2: Why did we get different results (number of drops) on each trial?
Hypothesis 3: It's because of the different heights the drops were dropped from.


Question 3: Why did the water form a dome shape on top of the penny?
Hypothesis: It's probably because of the waters cohesive property.

Here, the hypothesis once again contains the independent variable - the cohesive property of the water, while the question sets up our dependent variable concerning the shape of the water.  In our next experiment - we will need to disrupt the cohesive property of water by adding soap to one jug of water and comparing to the number of drops of regular water.

First off, we need to understand the nature of asking the question in science.  There are two types of research based questions that we'll study this year: Field Research questions (or case study) and Cause & Effect questions.  Depending on the nature of the original question and hypothesis will determine the type of follow up question.

*These questions simply examine the subject as if you were to observe it with a fine tooth comb and a magnifying glass.

*These questions look for causation relationships, and are the only questions that can be re-written as an "if / then / because" statement.

How to convert Cause and Effect questions to "If / Then / Because" hypothesis statements:

In order to restate your hypothesis with an "if / then / because" statement, the question needs to be rephrased as a cause & effect question, as it will not work well with a field research based question.  Example:

To do this, use the generic formula below to fill in the blanks.


Notice how this flows much like a normal conversation.  Watch how it works:

You and your group formed a question based on an observation from the previous experiment.  Your job is to take that question and identify the independent and dependent variables, then convert them to a cause and effect question - which then will be turned into if' / then / because hypothesis statements.

Finish the next page, where you are to identify the materials and procedures of your next experiment.
Continue reading if you are struggling with your question & hypothesis statements:

After determining what variables we want to work with, we need to rephrase the original question as a testable question.  Below is a generic version of the question statement.

Let's say that our original question was "How does salt affect waters cohesion?".  Let's also say that our hypothesis was that salt will get in between two water molecules and weaken the attraction between the water molecules.  Our next step would be to consider any possible variable that would be remotely associated with the experiment.  Below is our list of variables.


Next, we pick out the variables that I am changing and manipulating - as found in our question and hypothesis.  Since our original question is about salt and how it affects cohesion - the amount of salt is a better determinant than the type of salt, and we can't directly determine the cohesiveness of water - but we can indirectly determine it by the number of drops.  Therefore, when we rephrase the question it might look something like this:


This question turns a general question like "how does salt affect the cohesive property of water" into a more specific testable question - that is still reflective of the original question.

Our next step (fifth) is to create a testable hypothesis.

Since our original hypothesis reflects how the cohesive properties of water would be weakened because the salt molecules would get in between two water molecules, we should expect to see the number of drops go down as a possible outcome.  Therefore, when we write the refined hypothesis it should reflect the experiment and explanation of the possible outcome if proven correct.

The generic version of a hypothetical test statement looks like this:

This now describes the premise of your experiment and basically how you plan on carrying it out.

Our final step at this point before carrying out the experiment is to come up with a list of procedures and the list of materials you will need to carry out your experiment.

With procedures - be sure that they are precise and detailed.  It needs to be written in a way that others can follow.
Sources:
different types of scientific questions

what are the different types of scientific investigations