Rock Forming Environments - Interpreting Earth's History through Rocks.
On this day, we examine some common, everyday rocks and make some observations.  We took out a piece of paper and made three columns. 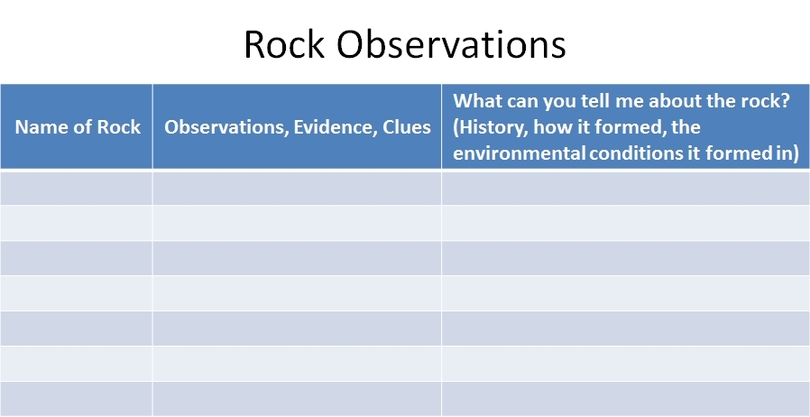 The students then went around and made their observations for about 40 minutes.  Afterwords, I had the groups of tables pick 5 different rocks and discuss their findings.  We then gathered as a class and discussed a few of the rocks.

Every rock has a story to tell.  It also tells a little bit about the history of how that region was formed.  Here are some basic rock types and the stories they have to tell.

Granite formed deep underground as a large magma plume called a batholith.  It's large crystals indicate the length of time it took to cool and crystallize.  The Sierra Nevada's, like Yosemite's Half Dome Rock, is a classic example of where you can find these rocks.

Rhyolite has the same minerals as the granite rocks (high in silica, but low in iron) - but it formed outside the volcano instead of inside.  Most likely it formed as a pyroclastic flow as it pummeled down the mountain, or a slow viscous lava flow.

Basalt is generally an extrusive formed rock with very little quartz and a lot more iron.  It's what our oceanic crust is made out of, and many lava flows like the one seen up right.  Many basalt rocks form dykes and sills - underground cross cutting rock formations.

Technically, there are three types of lava rock here.  The one that is holey & dark is scoria, the one that looks ropey is Pahoihoi, the one that has jagged chunky edges is called A'a.

Basically, all of them formed outside of the volcano.  Scoria has the bubbles due to out-gassing - or gasses escaping as it cooled rapidly.  Each of these are mafic, meaning high in iron, and low in silica.  This means that they are less viscous and flow much easier than the silica based lava's.

Pumice (not pictured here) is felsic - meaning that it is higher in silica and not iron - also formed outside of a volcano, and cooled rapidly.  This is why it also has small holes.

Obsidian is a glassy rock.  Part of the chemical makeup of this rock is the high silica content (quartz) which gives it its glassy look, and is more related to granite and rhyolite than basalt (geology.com).  But, don't be fooled, this is not a quartz crystal - rather, this is glass.  It fractures like glass - leaving a conchoidal fracture.  Because it is not a crystal - that gives us a clue how they formed - quickly with very little gas.

It is suggested that with the low water content - the Obsidian had low amounts of gas when it erupted - signifying that it was towards the end of a Rhyolitic lava flow and cooled rather quickly (Bakken, 1977 as quoted in Miller).

Sedimentary rock is made out of sediment.  Sediment is broken up pieces of rock.  We call the breaking up of rock process weathering, and the carrying away of the sediment erosion.  When the water or wind is no longer carrying it away, but instead drops it, we call it deposition - simply because it has deposited or dropped from the load that is moving.

What glues the minerals together is the dissolved minerals in the watery solution that come out of the solution and stick to the sides of the sediment. 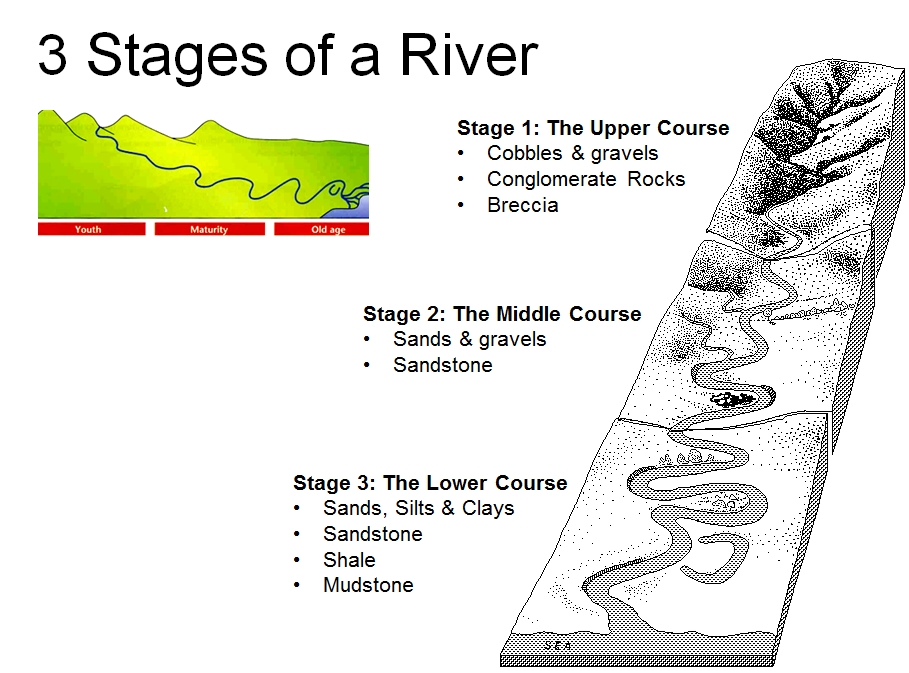 Most Sediment starts from the tops of the mountains that are exposed to weathering.  Minerals interact and can sometimes react with water to form the clay minerals, or break off to form the sands, silts and gravels.

Gravity and other processes play a significant roll in the formation of rocks found at the surface.  We will begin with the types of sediments and rocks that form at the top of the mountain in Stage 1, and work our way down through Stage 2 till we get to the end at the sea or lake level at Stage 3.

Stage 1: Sediments & Rocks formed from the upper course of a river.

Stage 1: The Upper Course of a River
At the upper portions of the mountain, the streams are at a sharper angle; therefore, the streams run fast and have a lot of energy.  Because the energy level is greater, the larger rocks are left behind as the smaller sediments are carried away.  Below are two common rocks that are formed in those environments.

Conglomerates, to keep it basic and simple, are first formed by running water to round out the rough edges of the rock first.  Second, they have deposits of other rock materials that are dumped later over it.  Third, the minerals that are dissolved in the water later precipitate out of solution to form the cement that binds them together.

If you'll notice the jagged edged pebbles or gravels that make up Breccia, it's a dead giveaway as to how it formed.  Much like Conglomerates, Breccia's are formed from bits of other rock that have been cemented together - but the jagged edges suggest that a short duration of time was involved with the formation of the rock.  Instead of a continuous, long duration of time involved with water, it had a short burst with water.  What caused this is most likely due to a flash flood deposit - where rock was broken off, carried away, and later deposited.

Stage 2: The Middle Course of a river

Stage 2: The Middle Course of a River
At the middle course of the river, some gravel and some sand may be left behind, but the silts and clays move on down the river.  This is a precursor area of a flood plane.

As the energy of the river slows down, sand becomes harder to push along; therefore, the sand starts to deposit along the banks of the river.  This is just one of several types of environments that form sandstone.  Other forms of sandstone origins include beaches & sand dunes.

Stage 3: The lower course of the river

Stage 3: The Lower Course of the River

As the river begins to slow down, the capacity of the river to carry sediment diminishes.  This means that the remaining smaller particles begin to settle out such as sand and eventually silts and clays.  As a river, it still will carry some silts and clays, but once the water hits a pool of water such as a lake or ocean, the remaining particles of sediment drop out - forming layers of "dirt" or sediment.
Shale signifies that a lake bed was once there.  Shale is formed from the silt and clay deposits at the bottom of a lake or flood plane, or where a slow river dumps into the ocean - like in Louisiana with the Mississippi river.  After it has been deposited, and after many layers have been deposited above, the dissolved minerals in the water precipitate out of solution and lithify (glue together to make a rock) the clay and silt minerals together.

Some of the most observable features of limestone are the notable fossils found in limestone.  That is a dead giveaway as to the environment that formed limestone - with the sea shells and trilobites.  Those fossils indicate that limestone formed in shallow inland seas like modern coral reefs.

Gneiss is formed from when Granite under a mountain is slightly heated, squished and re-cooled and recrystallized.  Eventually, the material above is weathered and eroded away - which eventually exposes the recrystallized material that once lay deep below.
Quartzite is formed when sandstone has been buried deep below, exposed to heat and partially melted.  Later, the material above has been slowly eroded away, exposing the quartzite material below.