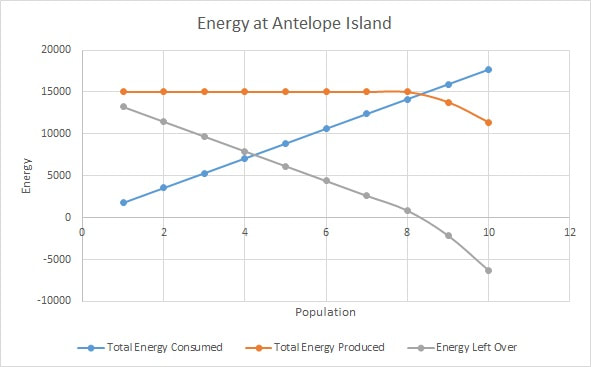 You will notice that as the population increases, the amount of available energy is diminished.  On the following day we will discuss the implications of this phenomena in our class discussion of "Population Dynamics".
On this day we examine both of these graphs and apply it to the real life - with the understanding that the graph pertaining to the prairie system is highly manipulated.  (Critters don't populate like that - and there really is no predation in this example).  Nevertheless, it does serve to explain many aspects of how a population size puts demands and stresses on the environment.

For instance, if we were to replace the prairie system with a cow pasture - it may make more sense.  If I had 10 acres of field grasses to raise cattle, how many cows could it support?  1 cow would be just fine.  But what about 5?  I'm sure it would be equally just fine.  But what about 15 or more?  There comes a point where the grasses on the field cannot keep up with the demands and rates of consumption.  Eventually, a few things start to happen on the field that we begin to witness. 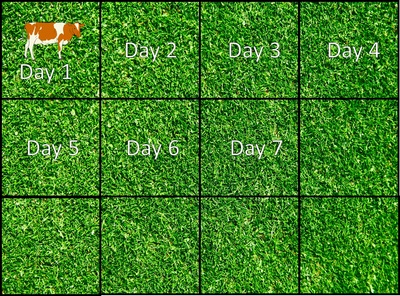 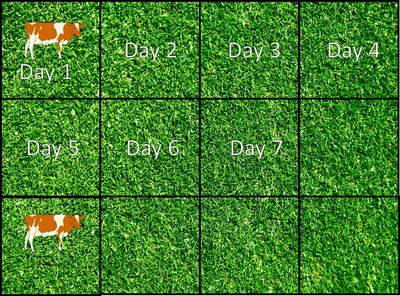 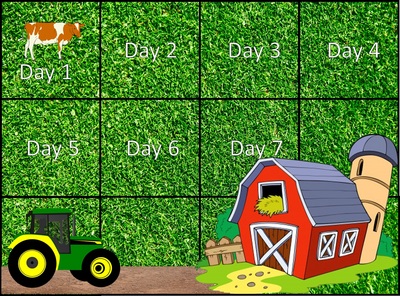 Let's assume that a cow can consume 10 square meters a day of grassland area in a pasture.
Since the field can only handle a certain amount of cattle on it, we have what we call a limiting factor.  A limiting factor is a variable in the environment that limits or slows the growth of an organism's growth or activities.  These variables can be space, food or shelter.  (Here is a resource that talks more about limiting factors and human impact).

This is why a predator pray relationship is highly important.  It's one of the ways nature keeps the populations in check, or balance.  If you will notice, in the Wolf v. Elk population graph, you may have noted that there were two columns as to why elk would leave the population - that is... death through predation or death through starvation.  This, of course, adversely affects the elk population.  But also note that as the wolf population grew after being re-introduced, the elk population eventually got to a point where it was no longer consuming more than the environment could handle - in other words, they were no longer starving.  It's really a matter of ecological economics.  I loosely coin the phrase after the basic study of economics, or the study of supply and demand.  Meaning - the environments ability to provide food (supply) and the population of critters that can be supported by the food supply (demand).

Limiting Factor: The factor that limits an areas ability to support life.

The importance of Preditors

The second graph that we worked on in class is the predator prey relationship between the wolves and the elk.  It should look like this.  We'll discuss this more on our next day - Population Dynamics.