In this unit, we will be examine the difference between mass, weight and gravity, and how inertia, mass and distance plays a role.

Atoms gives us matter.  Matter gives us mass.  Matter/mass gives the object gravity.  Being next to a planet that has a HUGE amount of matter/mass, which also has gravity, is what gives us weight.  In this section, we examine how different scenarios affect your weight.
Below are three ways to affect the gravitational attraction (aka: weight) between you and the planet.

Increasing or decreasing the distance between you and the planet

The Relationship Between Gravity, Mass & Distance

On this day - we examine the question: "Do all objects fall at the same rate?"  If they do not - what factors influence the rate of decent? 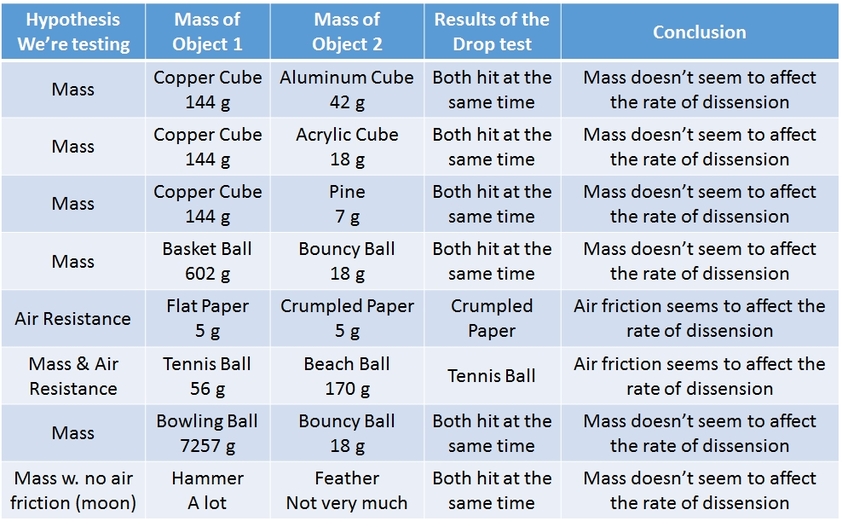 What we found was that each of the density cubes hit the ground at the same time - no matter what the mass.  But, we did find that the crumpled paper and flat paper hit the floor at different times.  Could it be that different masses are not a factor?  YES!  Mass does not make a difference.  That's because of inertia.  As the object increases its mass, it also increases its gravitational force (i.e. weight).  Simultaneously, it has also increased its inertia, or resistance to the push/pull/force)  And that's why all masses fall at the same rate.

To further and confirm our findings, when we drop the basket ball, bouncy ball and bowling ball - they all hit the ground at the same time.

However, could air resistance be a factor?  YES!  When we dropped the crumpled paper and compared it to the flat paper - the crumpled up paper hit the ground first by a long shot.  It was also confirmed when we dropped the heavier beach ball to the lighter tennis ball - and the tennis ball won.  This is because these objects have to swim through the air molecules as they drop.  We call this wind resistance (or rather - friction with air).

Therefore, when you remove the air - at such places such as the moon - where there is no atmosphere, light objects (such as a feather) fall equally as fast as heavier objects (like a hammer).  (See the two videos below - followed by the misconception videos below). 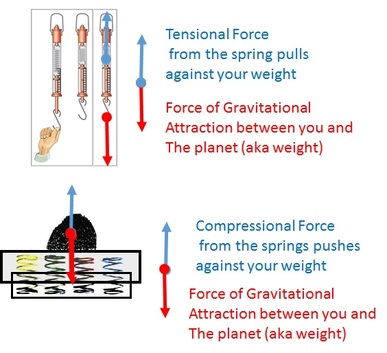 Weight, or the gravitational attraction between two objects with mass, is influenced by two factors: the amount of matter an object has (mass) and the distance between them.

IOW: If one of the objects increases its mass, it increases its gravitational pull.  If you increase the distance between you and the object, the force of gravity decreases and so does your weight.

Check out this source: Jefferson Lab

The video below also helps to explain the difference between mass and weight.  I would highly encourage you to watch it.

Part 6: Weight is a Force

Since a force is a push or pull, when you are attracted to the earth, the earth's gravity pulls on you and causes you to accelerate towards the ground - hence the phrase - the pull of gravity.  Therefore, weight is a measurement of the attractive forces between you and the earth - and mass, once again, is simply the "stuff" or "atoms" that make you up.

Part 8: Acceleration rate of the Earth

In an earlier lab - we learned that all objects fall at the same rate.  In today's lab - we are examining the acceleration rate of the earth by measuring the height and dropping a golf ball over the edge and timing how long it takes to drop it.  To do this - we:

By dropping an object over the balcony & timing it - students calculate the acceleration rate of the Earth.

Here is the data of some students that got it the closest.

Height: 5.74 meters
Time: 1.08 seconds
Step 1: Drop the string down the balcony (So that you can measure the height you will drop the object). 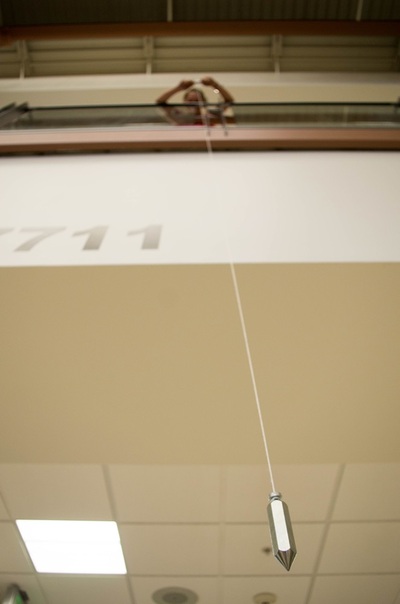 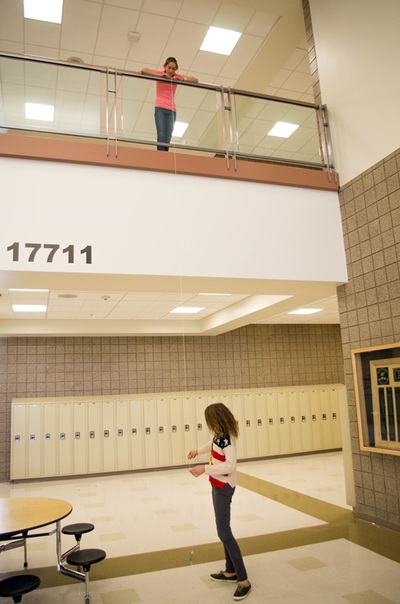 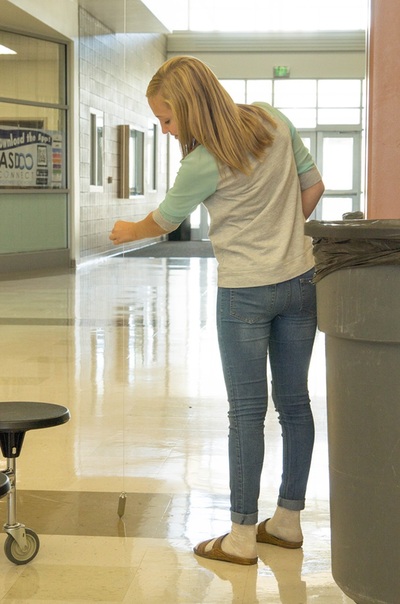 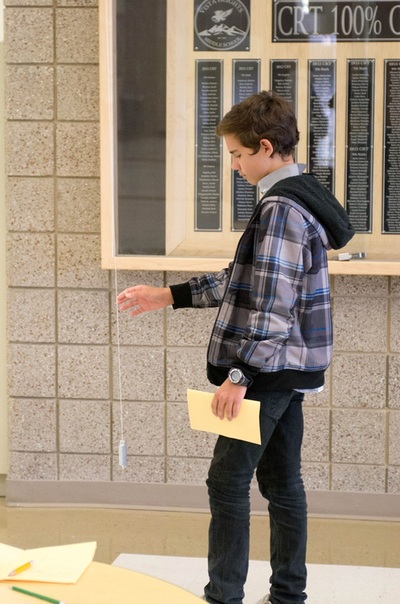 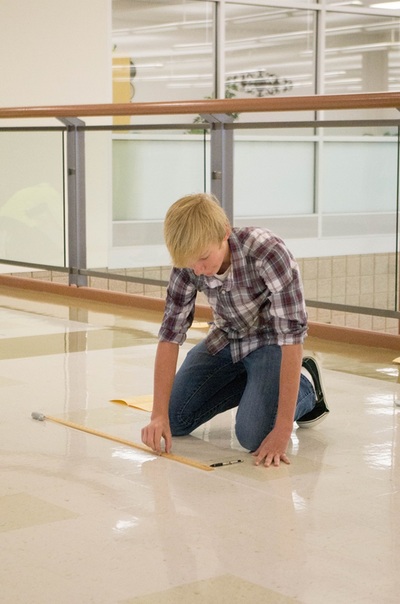 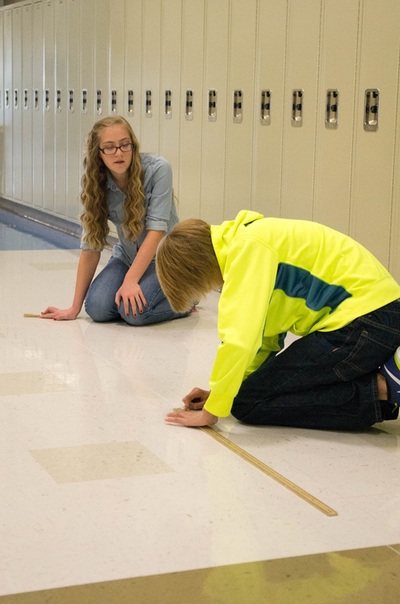 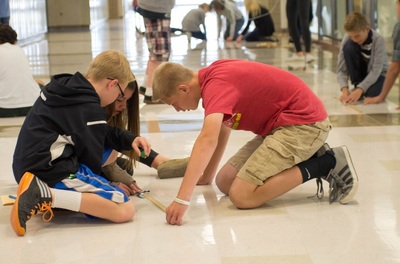 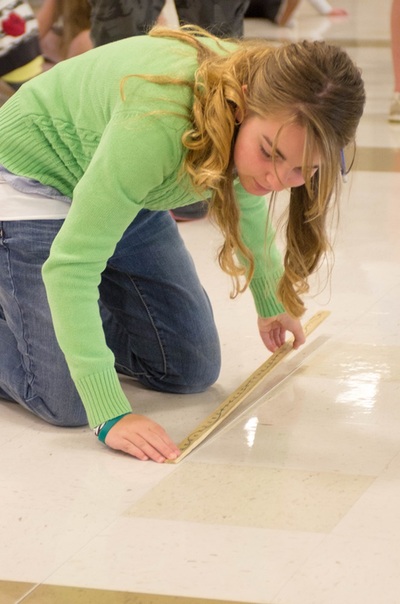 Step 3: Drop the object over the balcony (Look at the ball of clay as it descends down). 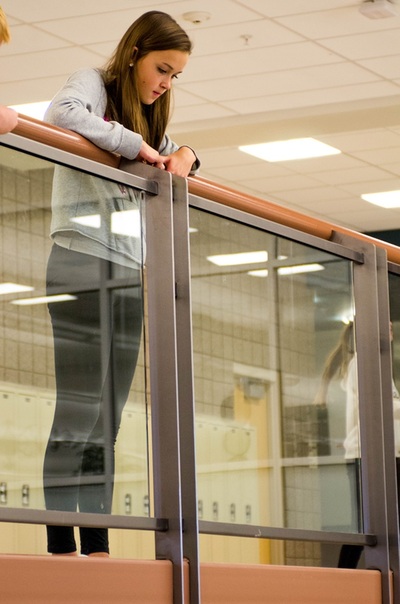 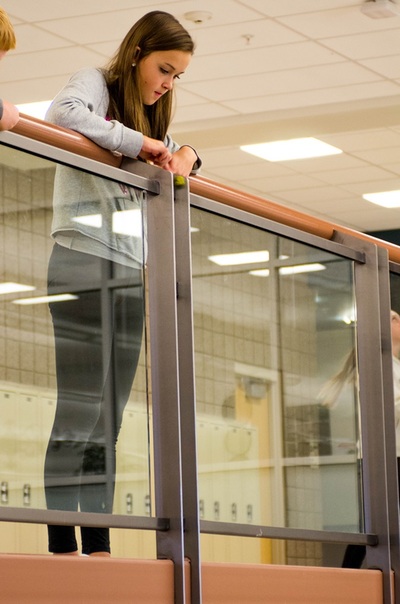 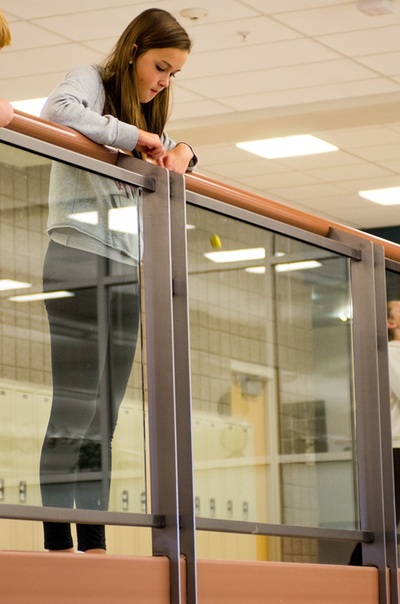 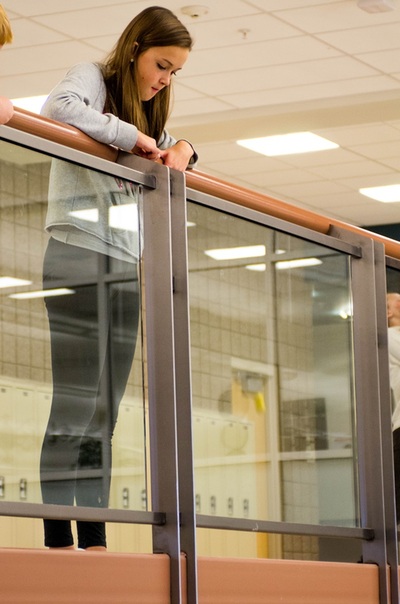 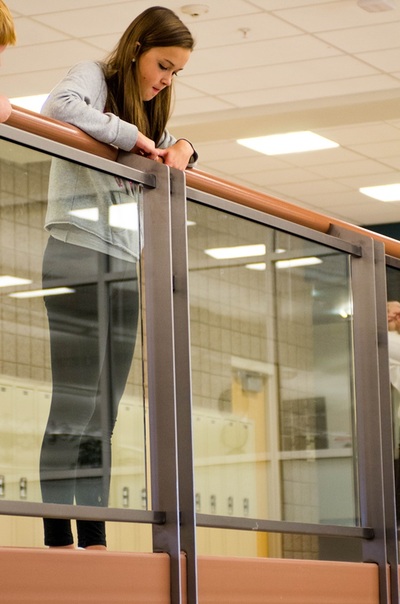 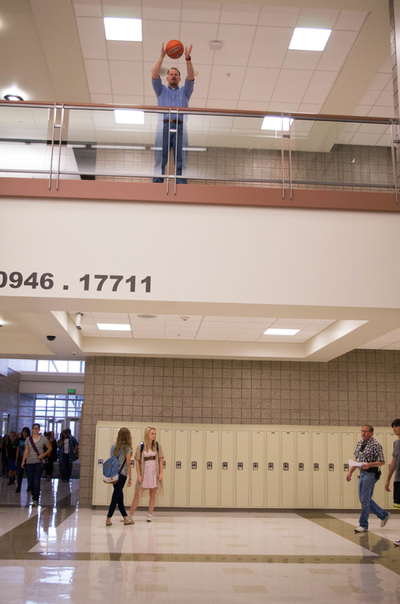 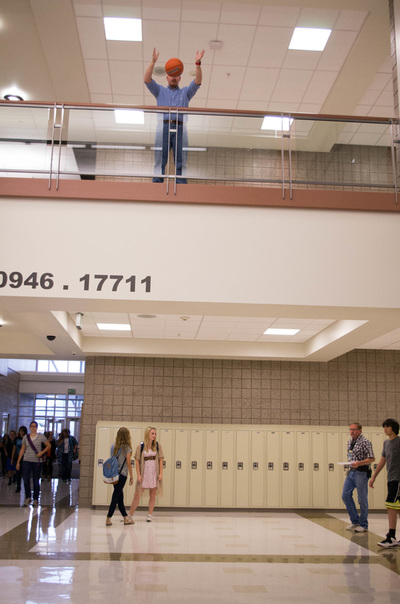 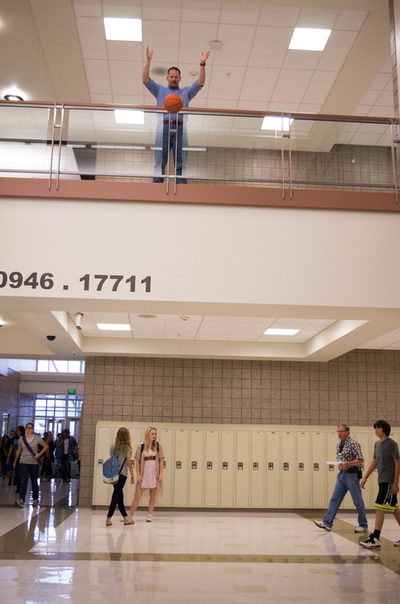 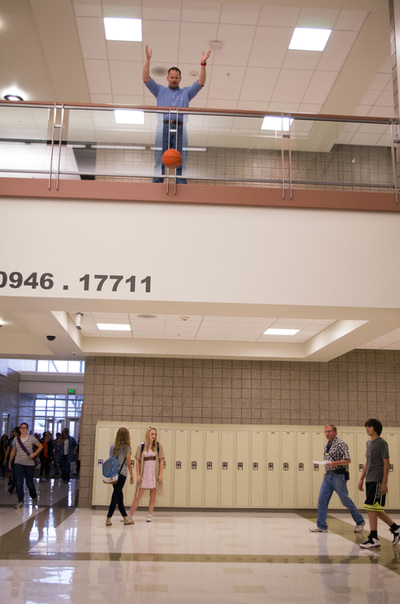 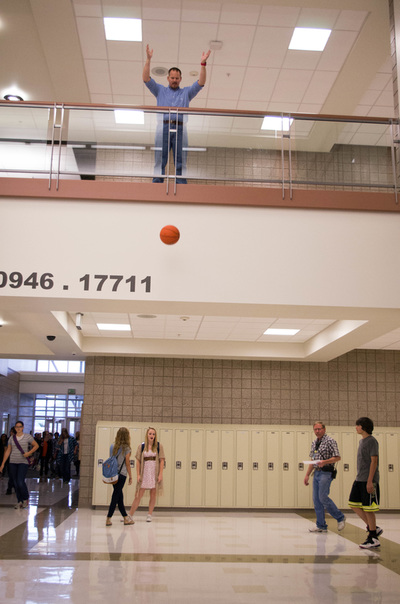 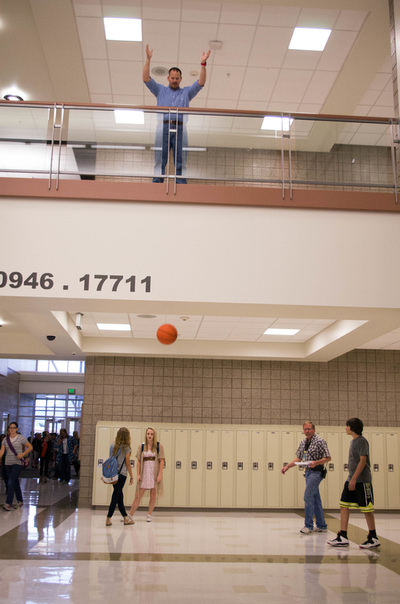 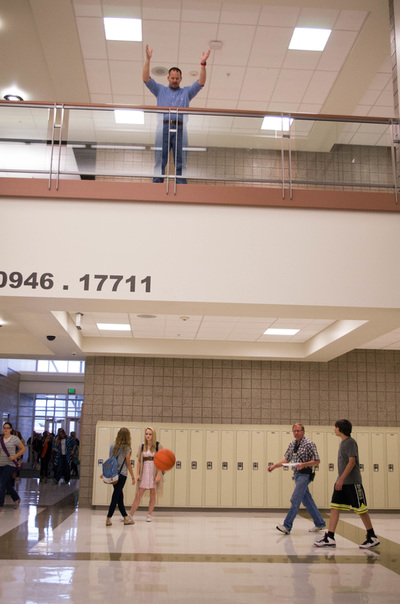 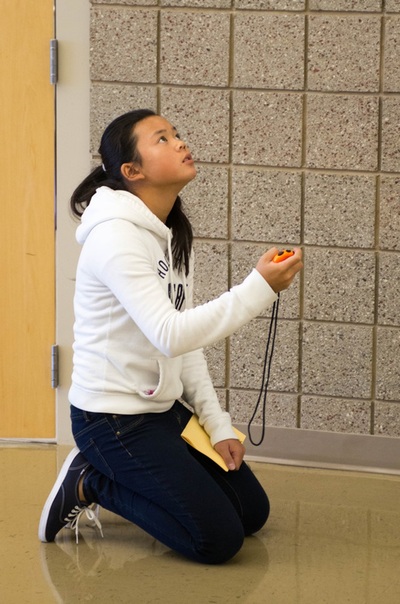 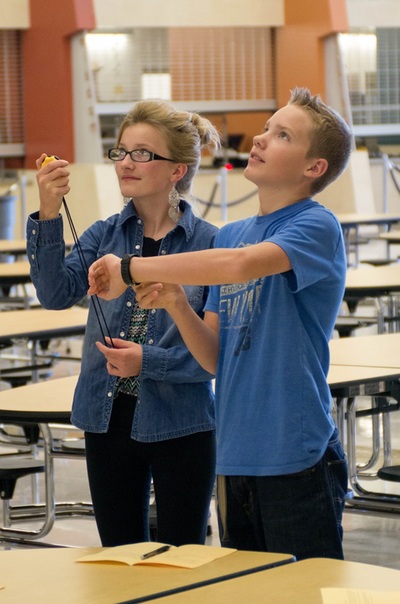 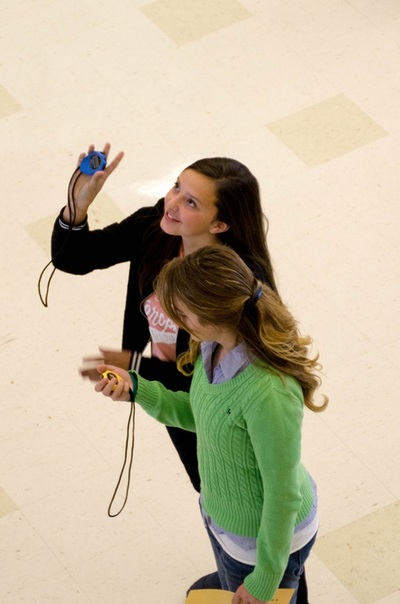 Step 5: Record your data.  Use this information to determine the rate of acceleration. 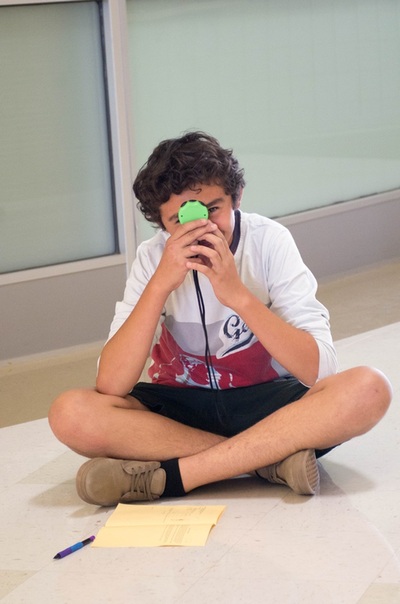 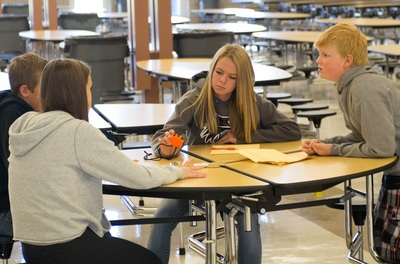 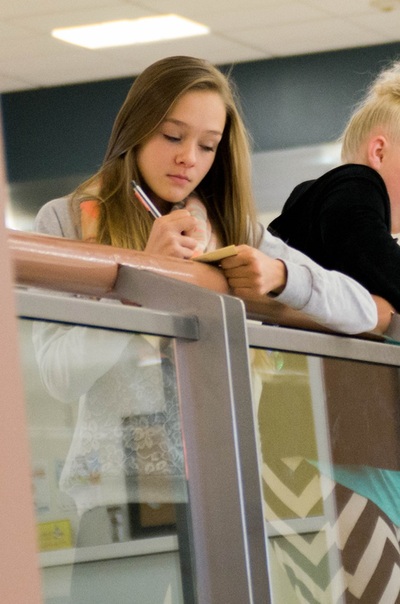 Wrapping it all up: