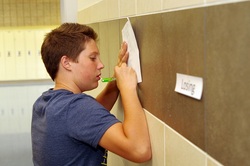 Objectives: When students finish today's activities - they will have a better understanding of collecting data, observations, inferring and the research process.

Scientists and all other researchers of their various fields will have a chance from time to time to collect information "out there" in the field, instead of always in the office.  This may range from a reporter who goes out to the field to interview those involved with a breaking story or a historian who may directly investigate an authentic historical artifact.  It may also range from a medical doctor who practices on their patients to a detective at the scene of a crime, or a lawyer heading a case.  Whatever role is being played, people will head out to the field to do direct first hand research, have to collect and interpret evidence and infer the meaning behind the articles of evidence.

In our activity - you were playing the role of a researcher who had to go out into the field - aka, the hallway, to collect information - or data.  After collecting enough data, you headed back to your office or lab and took the time to try to decipher what this data means.  Some students alphabetized their data, others clustered their words into groups based on some form of common theme - which eventually evolved into a story that seemed to form.  Eventually, many groups realized that they needed even more information - so I presented you with some further research that "other professionals" in this similar field of study have come across.  This is like reading the articles, books or other means of communication from other credible researchers within the same field.  Credibility, at this point, becomes vitally important to the credibility of your work as well; quote a source that is unreliable - and your credibility goes down the tubes.

Data analysis at this point becomes even more crucial - because you now have even more information to sort through and process, and it must all be considered. But how can it make sense - when it doesn't seem evidently clear what exactly it is that you are looking at?

This activity expresses some of the beauties and experiences of a person undergoing research. Some of the things you may have learned are: