*WARNING: MATH INVOLVED!  (And unfortunately, you must learn this tidbit of information).

After yesterday's lab - were you kept adding on segments to increase the Effort Arm to see how it affected the Input Force, you should have noticed that it got easier to pull up the object.  The reason why this occurred is because of Mechanical Advantage.  Another word for Mechanical Advantage is "Leverage".  To calculate Mechanical Advantage, it is simply the RATIO of the weight of the object, or "OUTPUT FORCE" to the force required to push it up - or "INPUT FORCE".

Mechanical Advantage is based on the ratio between the "OUTPUT FORCE" to the "INPUT FORCE".

To always show that you have an advantage, you want a larger number.  Therefore, with this ratio - you always want the output force to be a larger number than the input force - meaning that you don't have to push or pull any harder than the weight of the object.

A first class lever is designed with the fulcrum in the middle.

Some examples of a first class lever includes:

A second class lever is when the object is placed in the middle.

An example of a second class lever includes:

A third class lever is when the input force (hand) is placed in the middle.

Some examples of a second class lever includes:

Gardening tools that use mechanical advantage 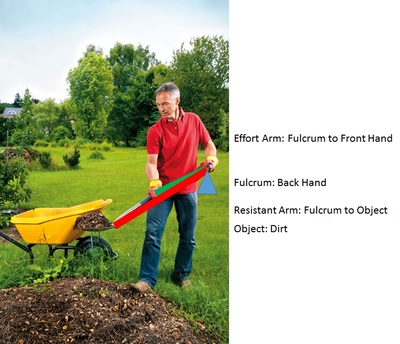 *WARNING: MORE MATH INVOLVED!  This little tidbit of information is not necessary to know - but it's cool to learn.

The reason why mechanical advantage works is based on a simple concept in physics called work.  Work is the same mathematical formula for "ENERGY", which equals "FORCE X DISTANCE".  The lever is much like a mathematical equation - where the fulcrum is similar to the equal sign; as such, the work on the effort side must equal the same amount of work on the resistance side.  Therefore, Work = Work, or FORCE X DISTANCE = FORCE X DISTANCE.

If both sides of the fulcrum had equal lengths, then the input force is equal to the output force; however, as you increase the effort arm, the input force gets smaller.  Simultaneously, the input distance increases.  Why is that?  That's because work must equal work.  As one increases, the other decreases and visa versa.  This is only a simple explanation to the phenomenon of why we get mechanical advantage. 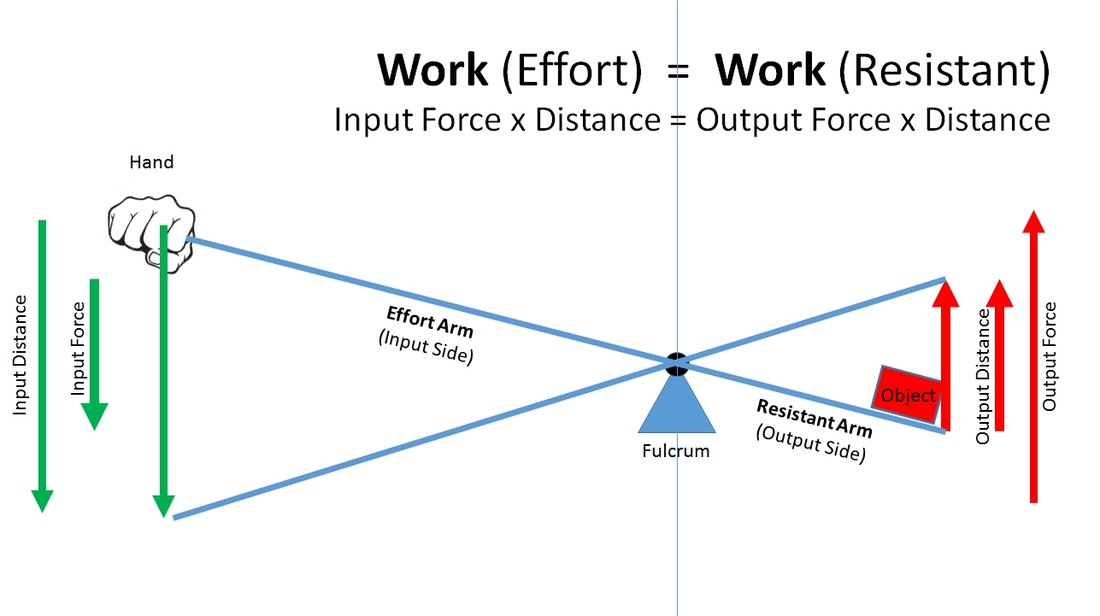