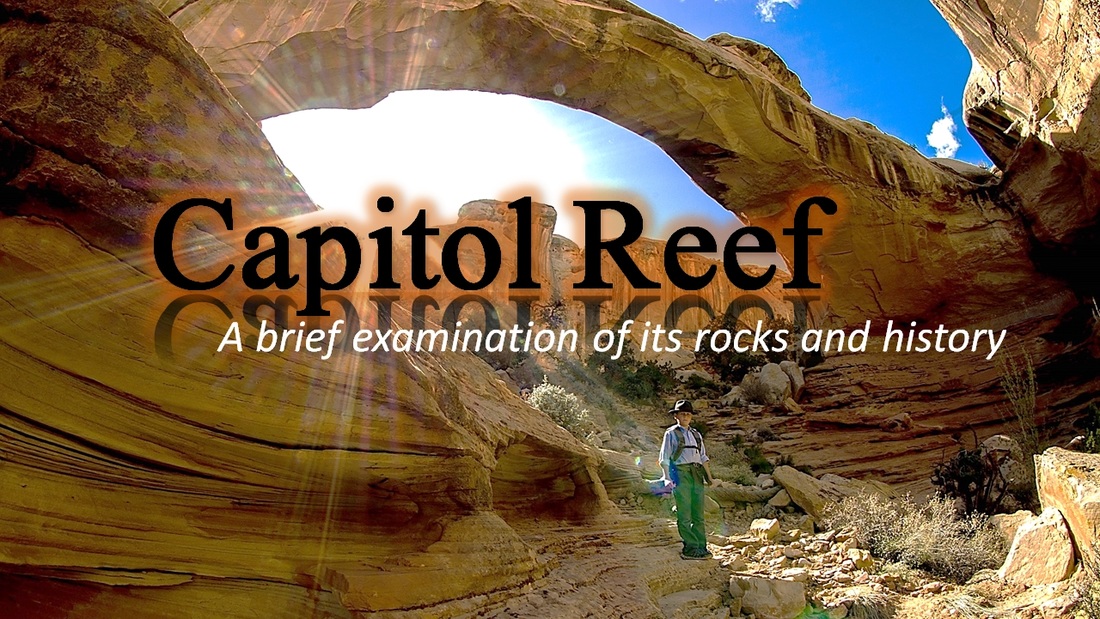 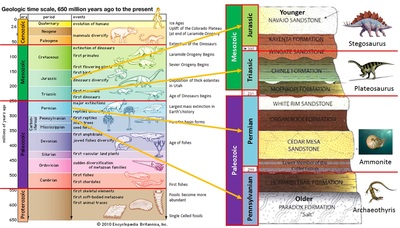 How do Geologists put dates on sedimentary rocks anyway?  The answer, in a nutshell, is through the fossil record.  This method is called "Faunal Succession" (UGS).  Prior to using the fossil record, the possibility of dating sedimentary rock by simply looking at it would be impossible.  However, it is fairly easy to tell which rock layer is older - simply by using the tools of relative dating mentioned earlier (i.e. superposition, cross cut relations etc.).  Therefore, to put a date range on a rock layer - geologists utilize another branch of study called "Paleontology" - or the study of "Ancient Life".  Paleontology requires the knowledge of two disciplines - biology and geology.  Without biology - and understanding evolutionary processes - dating rock layers would become extremely difficult.

Utilizing the fossil record, dating rocks can be made much easier.  If you look at the Geologic Time Scale, you may notice that it is broken up into several era's based on the fossil record.  The era's are Proterozoic, Paleozoic, Mesozoic and Cenozoic.

The earth is over 4.6 Billion years old.  In its infancy, the earth was basically a ball of hot magma that took time to cool down.  Over time, with the right conditions, earth became more hospitable to life.  How life began on Earth is a mystery - and it's not my place to discuss those theories here.  My focus instead is on the eras of Earth's history based on the fossil record.  The eras are based on the major life forms and events in earth's history.  Below is a basic discription of each era.

Proterozoic means "before animal life".  This era had primarily single celled organisms.  This era ranged from 2,500 Ma to 570 Ma.

Paleozoic means "Ancient Life".  In this era, the life forms were very sea ferrying animals that were very primitive to slightly more complex.  Some examples are the chordates & fishes in the Cambrian.  By the time we reached the Permian basic land plants & reptiles roamed the earth, but many species died off at the end of the Permian era.

Mesozoic means "middle life".  In this era are your major dinosaurs, or large "terrible lizards" such as the famous T- Rex and Triceratops.  This span ranges from 570 Ma to 230 Ma).

Cenozoic means "Present" or "recent" animal life.  These critters look more like the critters of today - i.e. mammoths, cave man, saber tooth tigers to name a few.  The animals of this era consists mostly of mammals and ranges from 65 Ma to the present.

How they date rocks

Geologists use the fossil record to determine the age of the rock layer when they find a fossil in that rock layer. 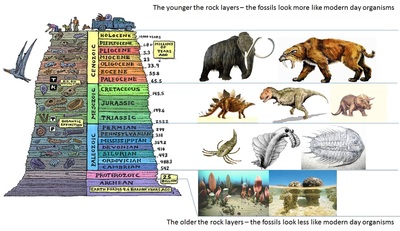 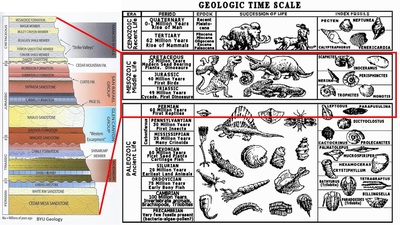 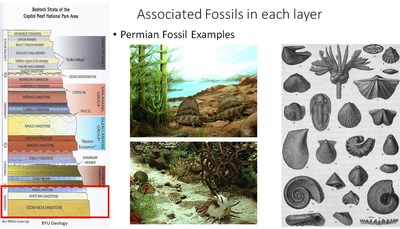 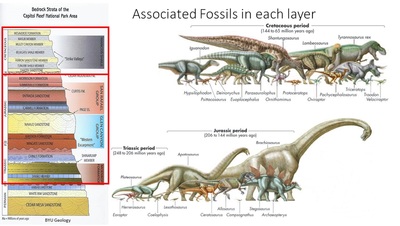 Capitol Reefs rock layers range from the Permian in the late Paleozoic to the Cretaceous in the late Mesozoic era.  This means that the history of the rocks in this region formed during the dinosaur ages and uplifted and eroded during the Cenozoic era.

Below are some slides explaining some basic information about most of the layers. 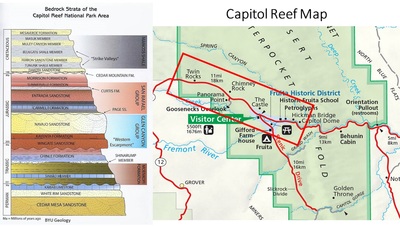 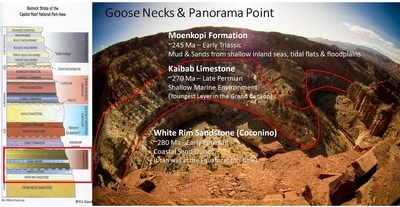 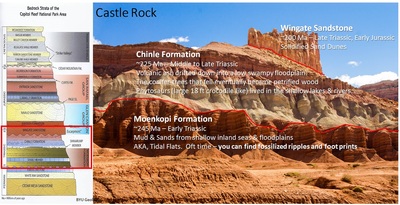 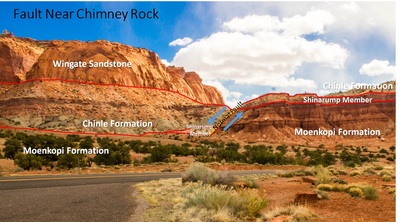 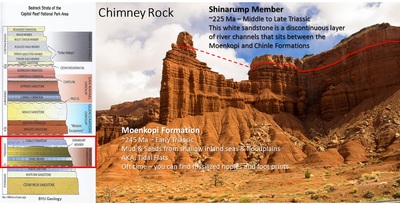 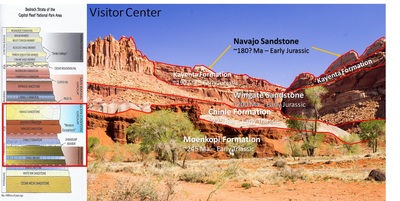 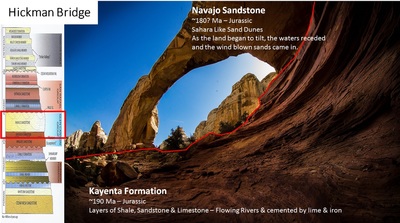 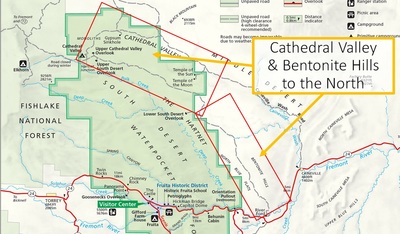 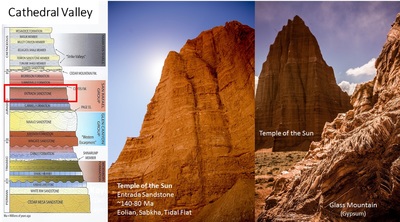 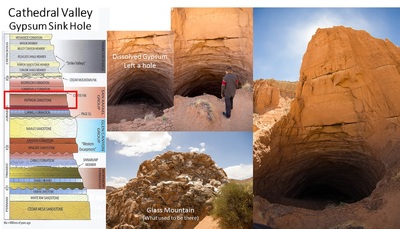 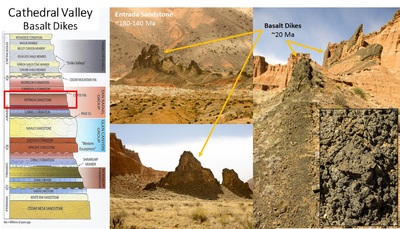 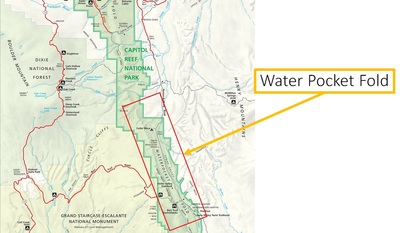 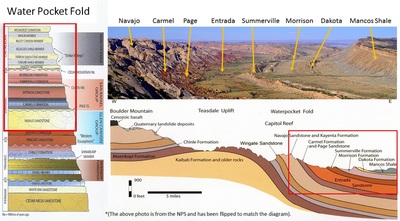 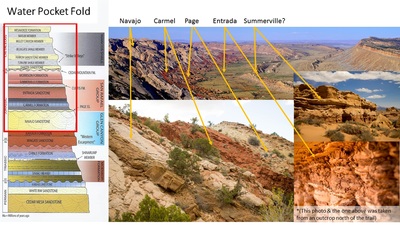 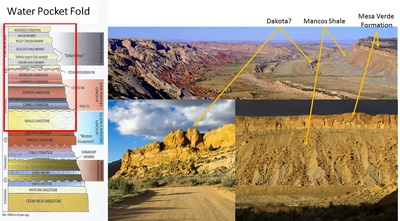 Basic History in a Nutshell

Human History within the Park 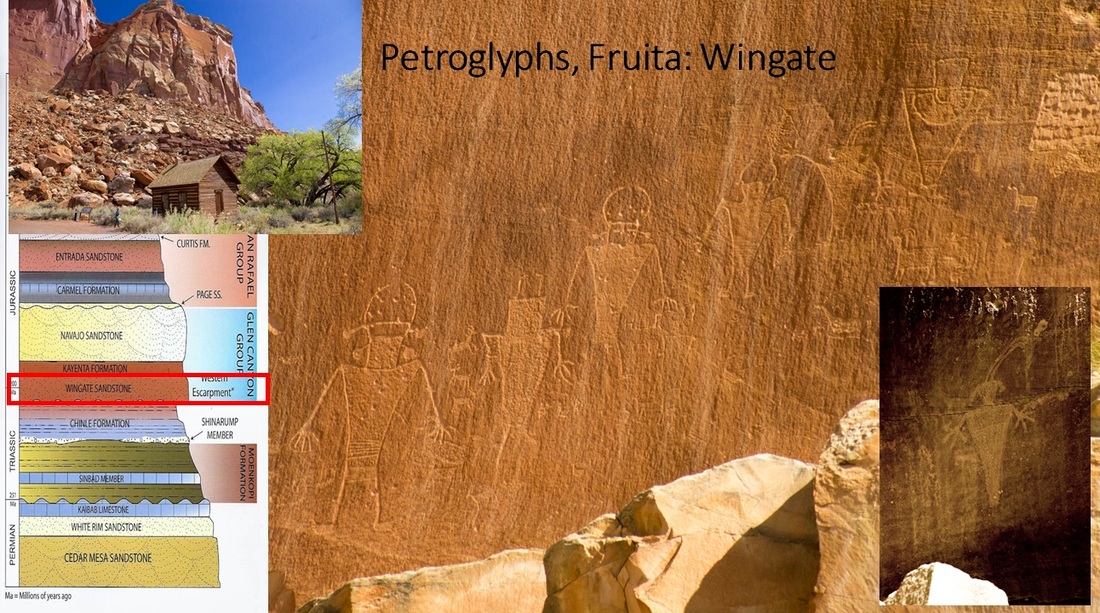