Link to the entire 6-8 grade standards.
​INTRODUCTION | GRADE 8
​Science Literacy for All Students

Science is a way of knowing, a process for gaining knowledge and understanding of the natural world. Engineering combines the fields of science, technology, and mathematics to provide solutions to real-world problems. The nature and process of developing scientific knowledge and understanding includes constant questioning, testing, and refinement, which must be supported by evidence and has little to do with popular consensus. Since progress in the modern world is tied so closely to this way of knowing, scientific literacy is essential for a society to be competitively engaged in a global economy. Students should be active learners who demonstrate their scientific understanding by using it. It is not enough for students to read about science; they must participate in the three dimensions of science. They should observe, inquire, question, formulate and test hypotheses, analyze data, report, and evaluate findings. The students, as scientists, should have handson, active experiences throughout the instruction of the science curriculum. These standards help students find value in developing novel solutions as they engage with complex problems 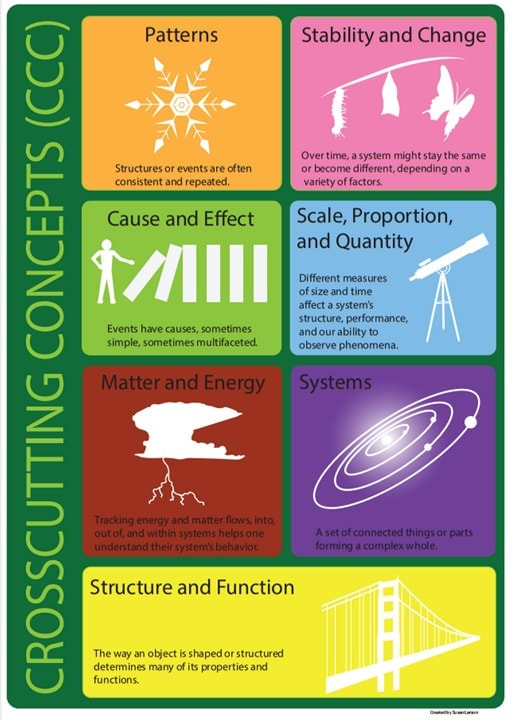 The Utah SEEd standards are organized into strands, which represent significant areas of learning within content areas. Within each strand are standards. A standard is an articulation of the demonstrated proficiency to be obtained. A standard represents an essential element of the learning that is expected. While some standards within a strand may be more comprehensive than others, all standards are essential for mastery.

The eighth grade SEEd standards describe the constant interaction of matter and energy in nature. Students will explore how matter is arranged into either simple or complex substances. The strands emphasize how substances store and transfer energy, which can cause them to interact physically and chemically, provide energy to living organisms, or be harnessed and used by humans. Matter and energy cycle and change in ecosystems through processes that occur during photosynthesis and cellular respiration. Additionally, substances that provide a benefit to organisms, including humans, are unevenly distributed on Earth due to geologic and atmospheric systems. Some resources form quickly, allowing them to be renewable, while other resources are nonrenewable. Evidence reveals that Earth systems change and affect ecosystems and organisms in positive and negative ways.

Strand 8.1: MATTER AND ENERGY INTERACT IN THE PHYSICAL WORLD

The physical world is made of atoms and molecules. Even large objects can be viewed as a combination of small particles. Energy causes particles to move and interact physically or chemically. Those interactions create a variety of substances. As molecules undergo a chemical or physical change, the number of atoms in that system remains constant. Humans use energy to refine natural resources into synthetic materials.

Develop a model to describe the scale and proportion of atoms and molecules. Emphasize developing atomic models of elements and their numbers of protons, neutrons, and electrons, as well as models of simple molecules. Topics like valence electrons, bond energy, ionic complexes, ions, and isotopes will be introduced at the high school level.

Obtain information about various properties of matter, evaluate how different materials’ properties allow them to be used for particular functions in society, and communicate your findings. Emphasize general properties of matter. Examples could include color, density, flammability, hardness, malleability, odor, ability to rust, solubility, state, or the ability to react with water. „

Plan and conduct an investigation and then analyze and interpret the data to identify patterns in changes in a substance’s properties to determine whether a chemical reaction has occurred. Examples could include changes in properties such as color, density, flammability, odor, solubility, or state. „

Develop a model that uses computational thinking to illustrate cause and effect relationships in particle motion, temperature, density, and state of a pure substance when heat energy is added or removed. Emphasize molecular-level models of solids, liquids, and gases to show how adding or removing heat energy can result in phase changes, and focus on calculating the density of a substance’s state. „

Develop a model to describe how the total number of atoms does not change in a chemical reaction, indicating that matter is conserved. Emphasize demonstrations of an understanding of the law of conservation of matter. Balancing equations and stoichiometry will be learned at the high school level.

Design, construct, and test a device that can affect the rate of a phase change. Compare and identify the best characteristics of competing devices and modify them based on data analysis to improve the device to better meet the criteria for success.

Strand 8.2: ENERGY IS STORED AND TRANSFERRED IN PHYSICAL SYSTEMS

Objects can store and transfer energy within systems. Energy can be transferred between objects, which involves changes in the object’s energy. There is a direct relationship between an object’s energy, mass, and velocity. Energy can travel in waves and may be harnessed to transmit information.

Use computational thinking to analyze data about the relationship between the mass and speed of objects and the relative amount of kinetic energy of the objects. Emphasis should be on the quantity of mass and relative speed to the observable effects of the kinetic energy. Examples could include a full cart vs. an empty cart or rolling spheres with different masses down a ramp to measure the effects on stationary masses. Calculations of kinetic and potential energy will be learned at the high school level. „

Ask questions about how the amount of potential energy varies as distance within the system changes. Plan and conduct an investigation to answer a question about potential energy. Emphasize comparing relative amounts of energy. Examples could include a cart at varying positions on a hill or an object being dropped from different heights. Calculations of kinetic and potential energy will be learned at the high school level. „

Engage in argument to identify the strongest evidence that supports the claim that the kinetic energy of an object changes as energy is transferred to or from the object. Examples could include observing temperature changes as a result of friction, applying force to an object, or releasing potential energy from an object. „

Use computational thinking to describe a simple model for waves that shows the pattern of wave amplitude being related to wave energy. Emphasize describing waves with both quantitative and qualitative thinking. Examples could include using graphs, charts, computer simulations, or physical models to demonstrate amplitude and energy correlation.

Develop and use a model to describe the structure of waves and how they are reflected, absorbed, or transmitted through various materials. Emphasize both light and mechanical waves. Examples could include drawings, simulations, and written descriptions of light waves through a prism; mechanical waves through gas vs. liquids vs. solids; or sound waves through different mediums. „

Living things use energy from their environment to rearrange matter to sustain life. Photosynthetic organisms are able to transfer light energy to chemical energy. Consumers can break down complex food molecules to utilize the stored energy and use the particles to form new, life-sustaining molecules. Ecosystems are examples of how energy can flow while matter cycles through the living and nonliving components of systems.

Plan and conduct an investigation and use the evidence to construct an explanation of how photosynthetic organisms use energy to transform matter. Emphasize molecular and energy transformations during photosynthesis. „

Develop a model to describe how food is changed through chemical reactions to form new molecules that support growth and/or release energy as matter cycles through an organism. Emphasis is on describing that during cellular respiration molecules are broken apart and rearranged into new molecules, and that this process releases energy. „

Ask questions to obtain, evaluate, and communicate information about how changes to an ecosystem affect the stability of cycling matter and the flow of energy among living and nonliving parts of an ecosystem. Emphasize describing the cycling of matter and flow of energy through the carbon cycle.

Interactions of matter and energy through geologic processes have led to the uneven distribution of natural resources. Many of these resources are nonrenewable, and per-capita use can cause positive or negative consequences. Global temperatures change due to various factors, and can cause a change in regional climates. As energy flows through the physical world, natural disasters can occur that affect human life. Humans can study patterns in natural systems to anticipate and forecast some future disasters and work to mitigate the outcomes.

Design a solution to monitor or mitigate the potential effects of the use of natural resources. Evaluate competing design solutions using a systematic process to determine how well each solution meets the criteria and constraints of the problem. Examples of uses of the natural environment could include agriculture, conservation efforts, recreation, solar energy, and water management.

Analyze and interpret data on the factors that change global temperatures and their effects on regional climates. Examples of factors could include agricultural activity, changes in solar radiation, fossil fuel use, and volcanic activity. Examples of data could include graphs of the atmospheric levels of gases, seawater levels, ice cap coverage, human activities, and maps of global and regional temperatures.

Analyze and interpret patterns of the occurrence of natural hazards to forecast future catastrophic events, and investigate how data are used to develop technologies to mitigate their effects. Emphasize how some natural hazards, such as volcanic eruptions and severe weather, are preceded by phenomena that allow prediction, but others, such as earthquakes, may occur without warning.